Raspberry Pi Compute Module – what does it mean?

As some of you may well know the Raspberry Pi Foundation have just announced their newest product – the Compute Module. It was unveiled in this blog post here. 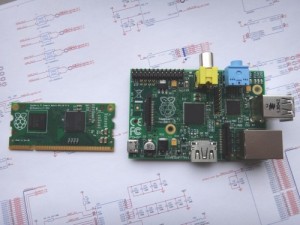 The Raspberry Pi Compute Module in all of its glory

First off: what on earth is it? What have they done with the cute looking Pi? Why does it look like a stick of RAM?! The answer to those questions is industry, and by industry I mean that this Raspberry Pi is for industrial users. Essentially the Compute Module is a shrunken down Raspberry Pi without any of the ports (instead you access it using the connector pins) and a 4GB eMMC chip (used for the operating system, instead of an SD card). The Compute Module features the same ‘guts’ as the traditional Pi: the CPU is the familiar BCM2835 processor and it features an entire 512MBs of RAM.

So what? How is that of any use to me? What does this actually mean? As I hinted at before the reason the Compute Module is being released is for industrial users: people who want to use the power of the Raspberry Pi professionally and don’t need things like the HDMI port. The Foundation say that ‘… the Compute Module is primarily designed for those who are going to create their own PCB…‘. That means that in the future we will see Compute Modules being used in very specialized circumstances.

However this board is not just for corporate companies. The Foundation are also launching something called the Compute Module IO Board: 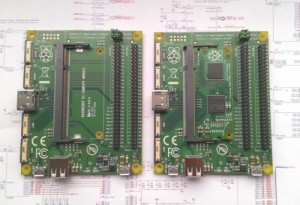 The Foundation describe this as: ‘a simple, open-source breakout board that you can plug a Compute Module into. It provides the necessary power to the module, and gives you the ability to program the module’s Flash memory, access the processor interfaces in a slightly more friendly fashion (pin headers and flexi connectors, much like the Pi) and provides the necessary HDMI and USB connectors so that you have an entire system that can boot Raspbian (or the OS of your choice)‘. The IO board makes the Compute Module friendly for the people who don’t have degrees in engineering! Yay! By the schematics provided (avaliable on the original blog post) it looks like IO board will harness a *lot* more of the Raspberry Pi’s potential power. For example one of the things I am looking forward to is that pair of camera connectors – 3D filming anyone?! Here is a recently released video of the board in action:

First look at the Compute Module in action

Whilst all of this news of new products and new possibilities is exciting a significant amount of questioning has arisen from this. Countless people have been complaining that the Foundation are not focusing on their primary aim: the education of young people. This was quickly explained by Liz and the team: ‘This is a way for us to raise that money. All profits go straight to the Foundation: we use every penny sales raise to build more educational resources, donate more Pis to more schools, train more teachers and help more kids.‘

When can I get my grubby mitts on one?! Sadly not for a little while: ‘These kits will be available from RS and element14 some time in June. Shortly after that the Compute Module will be available to buy separately, with a unit cost of around $30 in batches of 100; you will also be able to buy them individually, but the price will be slightly higher. ‘

In my opinion I think that the Compute Module and it’s accompanying board will be an excellent addition to the Raspberry Pi family – it offers a much more customizable approach and enables the Foundation to pump more money into their educational goals. I look forward to getting my hands on one!